CPRRA has won a Coastcare grant for the restoration of the block of native bush on the eastern corner of the intersection of Cassia St and Surf Beach Rd.

This vacant block has been maintained by local residents over the years but has never been the subject of a govt funded project to restore its high environmental values.  All that will change in 2013 …

Click on the heading of this article to read more …

The idea for the grant application followed consultation with residents of Cassia St who had, over many years, put a lot of effort into trying to protect this lovely reserve. 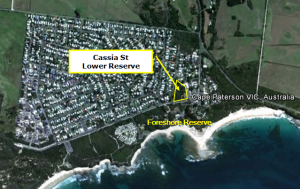 The site – “Cassia St Lower Reserve” – is located adjacent to the Foreshore Reserve at the corner of Cassia St and Surf Beach Rd, Cape Paterson.

The site is about 0.5 ha of Crown Land with high value remnant flora and fauna, but with a substantial weed infestation, that adjoins the Foreshore Reserve.

Site Features
The site contains a creek that flows into a part of the Foreshore Reserve where the community has undertaken environmental restoration work every year since 2007 under five Coastcare and CfoC grants, totally $145K in grant funding and delivering ~$450K in equivalent investement funding.

The $13,800 to be received from the grant ($12,600 after GST is paid) is for the first stage of a project that will probably take 2-3 years to complete.  This first years activities, to be undertaken by contractors and community volunteers, will include:

The project plan and status is provided below.